Welcome to our stop on the Vala: Agendas Blog Tour for J.F. Jenkins. The tour is hosted by Reading Away the Days. 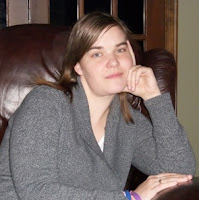 Author Bio: J.F. Jenkins lives in Minneapolis where she spends most of her time creating and plotting world domination – something that has been in the works for roughly 13 years.


In her free time she works as the local coffee wench and dominates the minions of the pixilated world on her PS3.

She’s also got a little man (J Walk) and a little man trapped in a big man’s body (J Dawg) to take care of along with her two fur babies Ushi and Tibu.

She is currently unrepresented by an agency. Email with questions and comments. Summary: (from Goodreads) Cheyenne Loveless was just a boring sixteen-year-old girl. Then Denver Collins bit her and everything changed. Her plants start talking to her, she finds out she’s a Nymph, and a witch and the angel of death show up at her doorstep to take her away to the prestigious Vala School and Seminary. Oh, and she has no choice in the matter.


All she wants to do is blend in and return to being invisible, but the more time that passes, the harder that becomes. Plus she’s a daughter of the Divine, an exclusive secret society which rules the world of myth, and discovers she is a key ingredient to an ancient covenant created before she was born. A covenant that will reshape the order of the world.
Adjusting to a new school is difficult enough, but adding on everyone else’s hidden agendas is the icing on the cake. Cheyenne must learn to see through the lies in order to find her place — and possibly even love — in this new world.

Cheyenne is just another girl who falls to the wayside in her school and is quickly dismissed as the unpopular nerd. It's not until one night at a party she somehow got invited to at the new nightclub for teens that her whole life changes. It's this particular evening that she meets Denver Collins, a brooding, dark and handsome young man with emerald green eyes that melt Cheyenne's insides every time she sees him. Denver invites Cheyenne to take a walk outside the club with him and instead of making out up against the alley wall, he asks her for a taste ... bewildered she says yes and he bites her. It's this bite that blows Cheyenne's whole world apart.

The next day Cheyenne gets a visit from two strangers whom her mother has invited to dinner. The strangers before her are a witch and an angel of death. They join them to explain to Cheyenne that she must come with them to the Vala School and Seminary. Vala is home to students of all grades up through college who are gifted and talented but not in the traditional sense. Cheyenne in particular belongs to a sect of their population called the Divine. The Divine are a secret society whose members are born of mythology. Cheyenne in particular it turns out is descended from Persephone.

Being a huge fan of Greek Mythology, I was tickled to read Cheyenne's story! The YA genre is filled with stories of vampires, angels and other magical creatures but not often Greek or Roman Gods/Goddesses. The story is a little bit slow at first but it picks up as it progresses. The characters are well developed and all now have a special place in my heart. I'm still rooting for Cheyenne and Zes, I am not a fan of Denver Collins and Lucien is properly creepy and makes my skin crawl. For any fan of the paranormal genre, I recommend this beautiful world that Jenkins has created! Look for reviews on her two follow up stories soon!