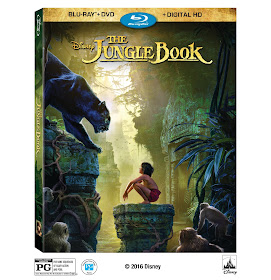 And venture deep into the jungle with in-depth bonus features

BURBANK, Calif., July 7 2016 — Audiences were mesmerized by Disney’s live-action epic adventure “The Jungle Book,” which has earned more than $935 million at the global box office to date.  Critically acclaimed, Jon Favreau’s stunning live-action reimagining of Walt Disney’s animated classic, will be available early on Digital HD and Disney Movies Anywhere on August 23, and on Blu-ray Combo Pack, DVD and On-Demand on August 30.

Venture behind the scenes with in-depth bonus features that reveal the innovative filmmaking technology used to create the richly immersive jungle world and characters; Follow the journey of the film’s only on-screen actor, charismatic newcomer Neel Sethi (Mowgli); Delve into a candid and humorous scene-by-scene audio commentary with director Jon Favreau and meet the all-star voice cast who help bring the film’s colorful characters to life, as well as the musicians who accent the adventure with a majestic music score.

The all-star cast includes Bill Murray (“Lost in Translation”) as the voice of Baloo, Sir Ben Kingsley (“Learning to Drive,” “The Walk”) as Bagheera and Lupita Nyong’o (“12 Years a Slave,” “Star Wars: The Force Awakens”) as the voice of mother wolf Raksha. Scarlett Johansson (“Avengers: Age of Ultron”) gives life to Kaa, Giancarlo Esposito (“Breaking Bad”) provides the voice of alpha-male wolf Akela, Idris Elba (“Beast of No Nation”) roars as the voice of Shere Khan, and Christopher Walken (“The Deer Hunter”) lends his iconic voice to King Louie.

Note: The 3D version of The Jungle Book will be available later this year.

Directed by Jon Favreau (“Iron Man,” “Iron Man 2,” “Chef”) and produced by Favreau and Brigham Taylor (executive producer of “Pirates of the Caribbean: Dead Men Tell No Tales,” “Tomorrowland”), “The Jungle Book” is a live-action epic adventure based on Rudyard Kipling’s timeless stories, inspired by Disney’s classic 1967 animated film and centered on Mowgli (Neel Sethi), a man-cub who’s been raised by a family of wolves. But Mowgli finds he is no longer welcome in the jungle when fearsome tiger Shere Khan (voice of Idris Elba), who bears the scars of Man, promises to eliminate what he sees as a threat.

The film’s musical score, composed by Emmy® winner and Oscar-, BAFTA- and Annie Award-nominee John Debney (“Elf,” “Iron Man 2”), features a classic orchestral sound accented by ethnic instruments and pays homage to the original film by highlighting snippets of the classic songs we all know and love.

About Disney Movies Anywhere (DMA)
Disney Movies Anywhere (DMA) is an engaging and family-friendly cloud-based digital movie service that makes it simple to buy your favorite Disney, Pixar, Marvel and Star Wars movies once and watch them anywhere.  With DMA you can explore Disney’s library of over 450 eligible digital movies, discover hours of new and exclusive short-form content, and watch your digital movies from the comfort of the living room or across multiple mobile devices.   You can add the free DMA app to a multitude of devices including iPhone, iPad, iPod Touch, Android mobile phones and tablets, Android TV, Amazon’s Fire tablets, Fire TV and Fire TV Stick, Roku, and Xbox 360. Then, connect your DMA account with participating providers including iTunes, Amazon Video, VUDU, Google Play, and Microsoft Movies & TV and your eligible movies will be shared across all your connected platforms.  In addition, you can redeem Digital Copy codes found in Disney, Pixar and Marvel Blu-rays and DVDs, as well as earn Disney Movie Rewards points with every digital purchase.

ABOUT THE WALT DISNEY STUDIOS:
For over 90 years, The Walt Disney Studios has been the foundation on which The Walt Disney Company was built. Today, the Studio brings quality movies, music and stage plays to consumers throughout the world. Feature films are released under the following banners: Disney, including Walt Disney Animation Studios and Pixar Animation Studios; Disneynature; Marvel Studios; Lucasfilm; and Touchstone Pictures, the banner under which live-action films from DreamWorks Studios are distributed. The Disney Music Group encompasses the Walt Disney Records and Hollywood Records labels, as well as Disney Music Publishing. The Disney Theatrical Group produces and licenses live events, including Disney on Broadway, Disney On Ice and Disney Live!.

Here at Once Upon a Twilight we are thrilled for the release of The Jungle Book, this is definitely one the biggest classics in children's literature to have been written. And Disney brought it to life.

So, thanks to Disney Home Ent. we are giving away one Blu-ray copy to a reader. Just enter below.

a Rafflecopter giveaway
Once Upon a Twilight at 3:00 PM
Share